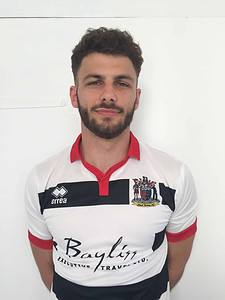 Lee has been one of our most consistent players since the current management team took over in January 2015. He is a versatile player who can play in both defence and midfield and is known for his high energy levels. Before joining Deal, Lee had a spell at Canterbury but has gone on to become a key figure at the Charles Ground and made over 40 appearances last year. Lee’s all action style will again be crucial as Deal look to have a successful 2016/17 season.

And now, as a new addition to our “Player Profile” feature, here is a short “Q&A” with Lee:

Other sports played:  Squash and racquetball, “and I like a bit of cycling as well”

Ambition in football:  “To play at the highest level I can for as long as I can”

Who is the biggest joker in the changing room: “The person who winds me up the most is ‘Biggy’ (Luke Bigginton) – and I bet everyone else says the same!”

This season Lee is kindly sponsored by LAB Plastering