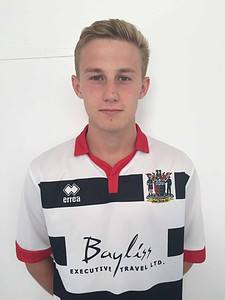 Jack joined on a dual registration from Ramsgate for the 2016/17 season. Jack is a young full back who enjoys getting forward and spent pre-season with the first team at Dover Athletic. He was a member of the successful Dover Athletic Academy and made a first team appearance against Bromley in the Kent Senior Cup. Jack has already made a good impression in his short time with the club by setting a goal up and earning Man of the Match in his debut against Rochester. We look forward to seeing more of the same over the coming months.

This season Jack is sponsored by Vicky’s Footcare – for all enquires please email Vickysfootcare@gmail.com Favourite Football Team: Dont have one

Ambitions: To own my own business

Which Team mate is the worst dressed: Sam Wilson

Which team mate has the worst taste in music? Liam Hark

This season Jack is kindly sponsored by the Paxman Family