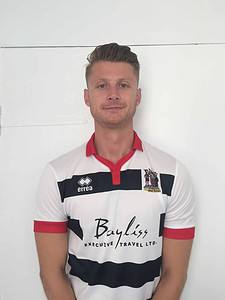 Although the current Deal squad is a fairly inexperienced group of players,  the one area where that situation doesn’t apply is the central defensive partnership of Dean Hill and Grant Bagley.

Like Hill, “Baggers” has been a familiar figure on the east Kent non-league scene for a number of years, first with Dover Athletic under the managerial regimes of Clive Walker and then Andy Hessenthaler, followed by spells with Canterbury City and Ramsgate before he came to the Charles Ground four years ago.

Grant started his career in junior soccer as a striker, then moved back to midfield before ending up at centre-half, which he feels is “probably my best position” and the 28-year-old from Whitfield who, like Jack Tanner, teaches at the Harbour School in Dover,  says he is still enjoying his football as much as ever.  “I think Deano and myself have formed a good partnership and I like playing under Del, Muzza and Kingy.

“I know we have had a couple of heavy efeats recently but I am sure we will turns things around, like we did last season, and the main thing is that the club is now moving in the right direction off the field.”

Grant reckons his most memorable match so far in a Hoops shirt was this season’s FA Cup tie at St Albans City – even though Deal lost 2-1 at the National South side. He said: “We put in a really good team performance and were a bit unlucky not to get a replay. It was just a memorable experience  all round, what with all the supporters who came along and everything,  and showed what this club is capable of.”