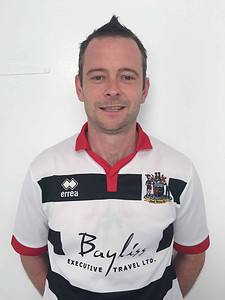 Danny Smith is Deal Town’s longest serving player and this season he has been awarded a well deserved testimonial by the club.

Thirty-three-old Danny made his first team debut in 2003 during Derek Hares’ first season as manager and has since gone on to make over over 400 competitive appearances for the Town, mostly on the left-wing before switching to left-back in recent campaigns.

Danny first started coming to the Charles Ground with his father Roy when he was about 10 years old and remembers admiring players like Stiggy Meadows, Paul Cureton and current first team coach Paul Murray. Then Roy took over as club chairman and, with Tommy Sampson as manager, built the FA Vase-winning side of 2000 and  Danny was in the crowd at Wembley along with all the other thousands of Town supporters on that never-to-be forgotten day in the club’s history.

But silverware has been elusive for Danny during his Deal playing career. He has appeared in five Kent Senior Trophy semi-finals for Town and lost all of them and says with a rueful smile: “I reckon I must be a bit of a Jonah!”

Danny has turned down a number of offers from other Kent clubs during his career but insists: “I don’t regret in the slightest staying with Deal all my career, but I just wish I had been 10 years older in 2000 and then I might have had a chance of playing at Wembley!”

Danny also manages the Deal Town Under-9 side, where his son Charlie is one of the players, and seems likely to carry on coaching when his playing days finally come to an end, saying: “Football has been a massive part of my weekends for such a long time, including playing for the old Deal Cosmos side on a Sunday, that I can’t imagine not being involved (in football) in some way after I stop playing.”

Danny had moved deeper to left back in recent years and had produced a number of good displays. His delivery from set-pieces and quality when shooting from free kicks means he will always be amongst the goals.

This season Danny is sponsored by Bayliss Executive Travel