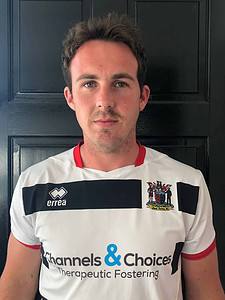 Charlie joined Deal from Ramsgate, where he played under Hoops’ captain Dean Hill for a while. Charlie is equally comfortable in midfield or as a striker. He has an eye for goal but also is a tough tackler who is a key member of the side.  He believes that reaching the Ryman 1 South is a realistic long-term target for Deal after having already played at that level for the Rams.

Job/Career: Run my own Roofing Company

Ambitions: To win the FA Vase

Which Team mate is the worst dressed: Steve King

Which team mate has the worst taste in music? Troy

Who’s the joker in the team, give us an example: Alfie Foster