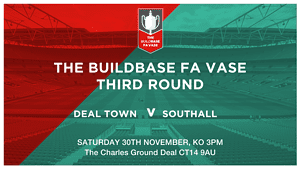 Connor Coyne’s two second-half goals clinched a place for the Hoops in the fourth round of the FA Vase for only the third time in the club’s history.
But, while applauding his striker’s man-of-the-match contribution, manager Derek Hares was keen to emphasise that the victory had been very much a team effort, saying: “I was proud of all the players today, they all worked hard and showed a lot of spirit on what was a great day for the club.”
In front of a near-300 crowd, the highest at the Charles Ground for 14 years, Deal produced one of their best defensive displays of the season to frustrate a Southall side who, like the Hoops, are former Vase finalists and who had also reached the quarter-finals of the competition just two years ago.
After carrying out a pre-match spying mission on the London club Hares had predicted that Saturday’s tie would be a “50-50 game”, and that was how it turned out for the opening 70 minutes with little to choose between two well-matched sides.
Deal’s best chances of the goalless first half fell to Coyne and Ben Cardwell and, although they were unable to take advantage, the duo were to later make full amends while at the other end the Southall strikers were also off-target in their few clear-cut openings before the break.
The contest continued in a similar vein in the second half until, with 71 minutes gone, Cardwell produced the piece of quality needed to break the deadlock. The striker’s powerful runs have been a feature of the Hoops’ attacking play this season and once again he dribbled his way deep into the visitors’ area before pulling the ball back for Coyne to side-foot home from six yards.
That gave Deal just the lift they needed, especially at the back where the determined defending of Lee Scott and Liam Hark frequently frustrated the Southall strikers, and then with nine minutes remaining the Hoops virtually wrapped up their place in the last 32 with a second goal.
This time Charlie Walsh was the instigator, using his pace in pursuit of a long ball and, although Southall ‘keeper Laurence Berkley just got there first, he “scuffed” his clearance straight to the feet of Coyne and the striker took full advantage with a 25-yard chip into the unguarded net.
While Coyne and Co celebrated you could almost sense that Southall now knew the game was up, and a delighted Hares added afterwards: “I felt the first goal was always going to be vital, and that whoever got it would probably go on and win the game. That proved to be the case, and now we can all look forward to Monday’s draw (which is going to be broadcast at lunchtime on talkSPORT radio).”
Deal: Tonkin, Hark, Penny (O’Brien 77), Scott, Foster, Munday, Chapman, Murray, Coyne (Howard 92), Walsh, Cardwell (Maughan 83).
Attendance: 296
Caption: Connor Coyne receives his MOM award from Steve Marshall, who was a member of the Deal side who won the FA Vase in 2000